Five Ways To Experience The Best of Hawai'i's Art and Culture

The island of Hawai‘i’s vast, diverse and often breathtaking landscape is home to six distinct moku – the Hawaiian word for “districts” – with lots for you to see and experience in each.

ISLAND OF HAWAI’I – Want to truly experience and appreciate the boundless natural wonder and diversity of the island of Hawai‘i’s landscape and its centuries-spanning intertwining with Hawaiian culture? For your next visit, plan a multiday road trip that’ll take you through each of the island’s moku.
Moku is the Hawaiian word for “districts,” and each of the eight main islands of Hawai‘i has them. The island of Hawaii’s 4,028 square miles are comprised of six moku – Hilo, Puna, Ka‘ū, Kona, Kohala and Hāmākua – originally divided from the whole of the mokupuni (island) as districts of rule by Hawaiian chiefs long before European contact. Within each moku were further land divisions called ahupua‘a, which, like most moku, encompassed land areas stretching from mountain summits to nearshore reefs and everything in between them, and contained and replenished nearly all natural resources their residents required for survival. Today, many Hawai‘i residents still informally recognize ancient moku as geographic markers.
The island of Hawai‘i’s six moku are fascinating in their diversity, individually home to everything from towering waterfalls, rugged coastline and places of recent volcanic activity, to emerald valleys, white sand beaches, dense rainforests and places of historical significance to Hawaiian culture. And because we’re now pretty much certain you’re going to road trip through all six, we’ve put together a listing of the places we recommend you check out within each moku.
Enjoy the ride, the scenery and our island’s magnificen† moku! 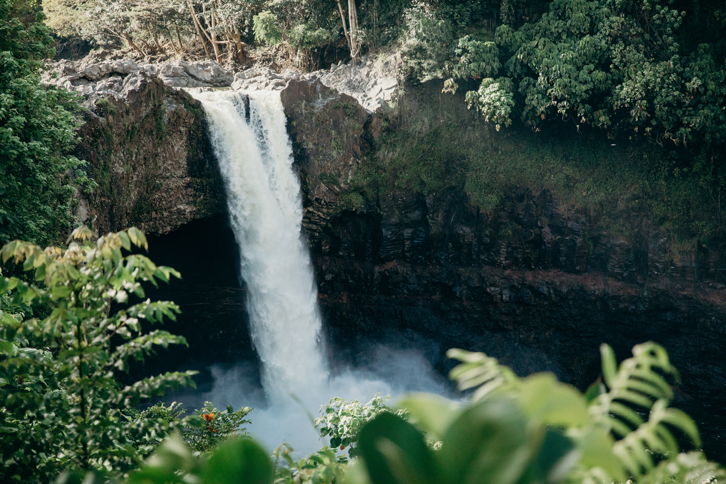 •Waiānuenue Falls/Wailuku River State Park.
Waiānuenue is Hawaiian for “rainbow (seen in) water,” which are often found surfacing the 80-foot cascade and its expansive, foliage-covered gorge on sunny mornings. Visit the park’s two locations: Waiānuenue Falls and nearby Pe‘epe‘e Falls and Boiling Pots, the latter a series of river pools and waterfalls connected by underground caves whose waters roil turbulently as if boiling. Swimming and water activities are prohibited at both locations due to unsafe conditions. 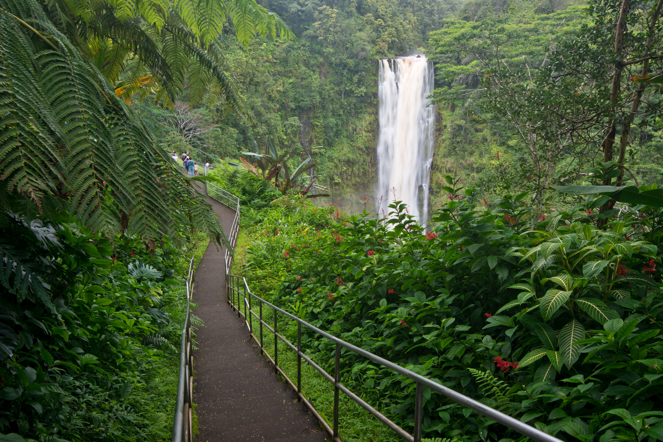 •‘Akaka Falls State Park. Plunging 442 feet from its crest into a deep, emerald gorge, ‘Akaka Falls is a bona fide breath taker. Almost as cool? The way the waterfall cinematically enters your view on a short loop-trail through its luxurious surrounding rainforest. Along the way, further downstream, a viewing platform offers a vista of 300-foot Kahūnā Falls; less impressive than the park’s main plunge, but still quite lovely. 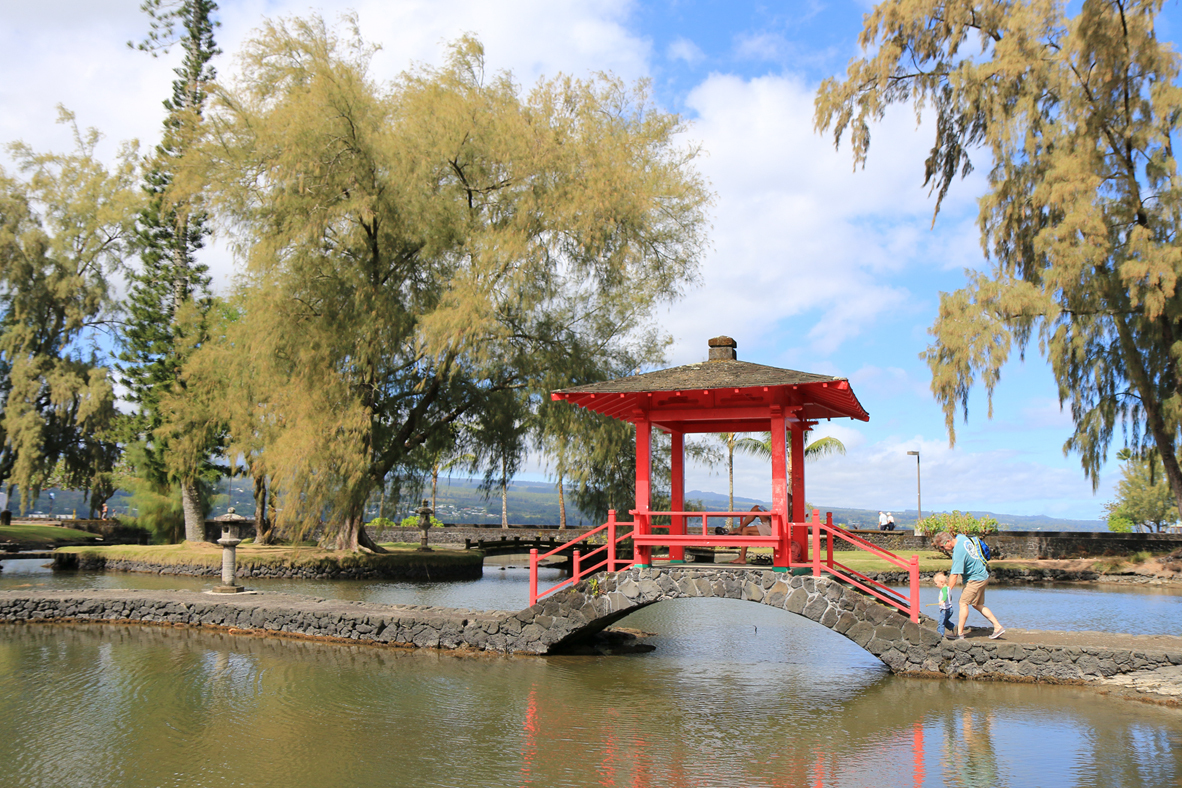 •Lili‘uokalani Park and Gardens. We still can’t decide on the biggest scene-stealer here. A century-old Edo-style Japanese public garden graced with ponds, walking bridges, pagoda, torii gates, a teahouse and lots of space for picnicking, on land given to its creation by Hawai‘i queen Lili‘uokalani. Or a commanding view of Hilo town’s pretty crescent bayfront and 13,803-foot Maunakea volcano from sea level to summit.

• Pana‘ewa Rainforest Zoo and Gardens. The only (and we mean ONLY) natural occurring tropical rainforest zoo in the U.S. is home to more than 80 animal species from the world’s tropics and several endemic Hawai‘i fauna, including the ‘io (Hawaiian hawk), nēnē (Hawaiian goose and state bird) and pueo (Hawaiian short-eared owl). Bonus: Anyone still at the 12-acre zoo at 3:30 p.m. (a half-hour before closing time) is welcome to watch as staffers feed resident tigers Tzatziki (a white Bengal) and Sriracha (an orange Bengal) their daily dinner of whole raw chickens. Entry is free, but donations are welcome. 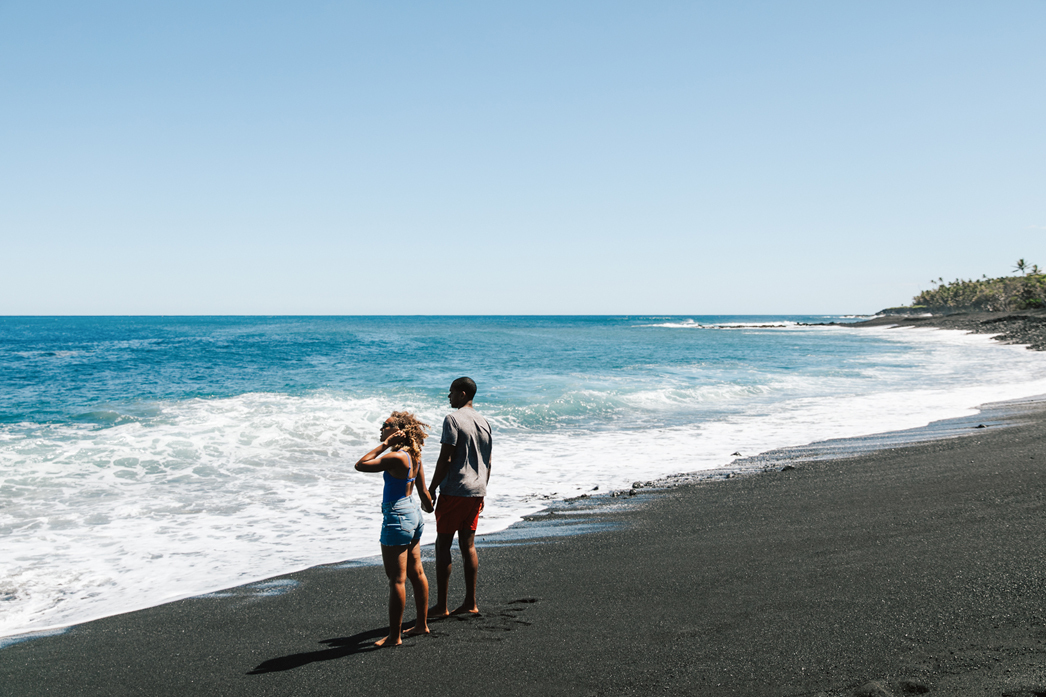 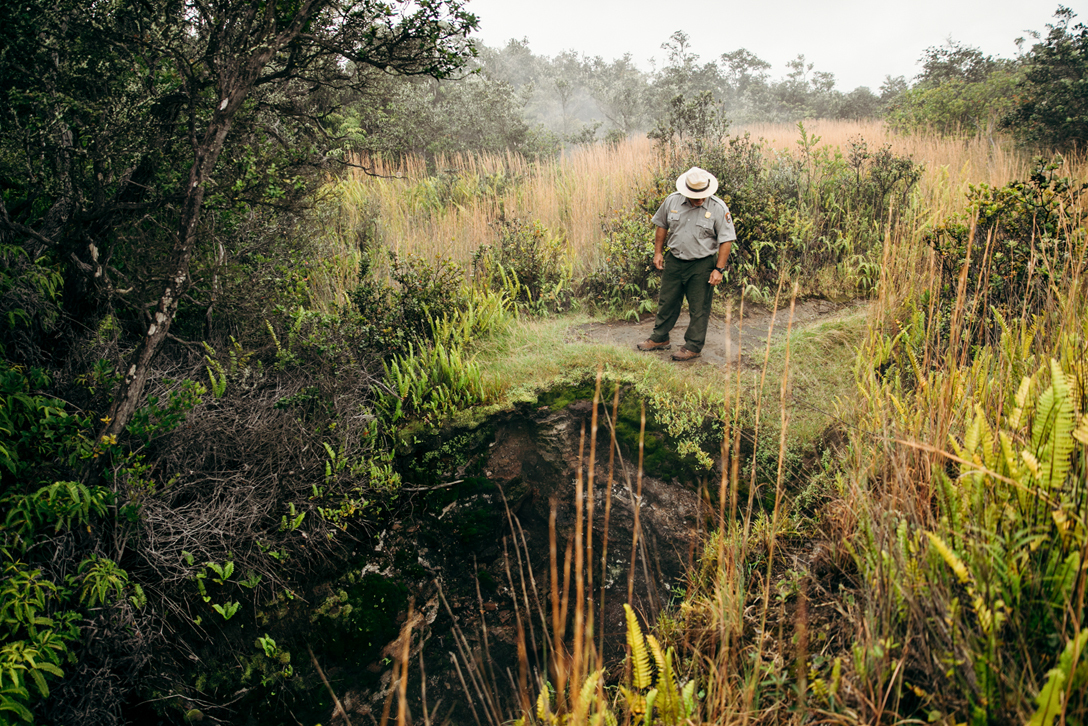 •Hawai‘i Volcanoes National Park. It’s not every day one gets to thoroughly explore a 333,000-plus acre showcase of six global climate zones, contrasting environments and landscapes, the geological forces that continually shape and grow our planet, and the deep connection between Hawaiian culture and the natural environment. But each of the above is what this astounding park offers visitors every single day, whether main attraction Kīlauea volcano is showing off with an eruption or temporarily slumbering. Plan to visit the park’s Kahuku Unit, too, for ranger-led and self-guided exploration of massive Maunaloa volcano’s 1868 lava flow, post- and pre-lava flow native forests, historic pasturelands and the history of people on its landscapes. 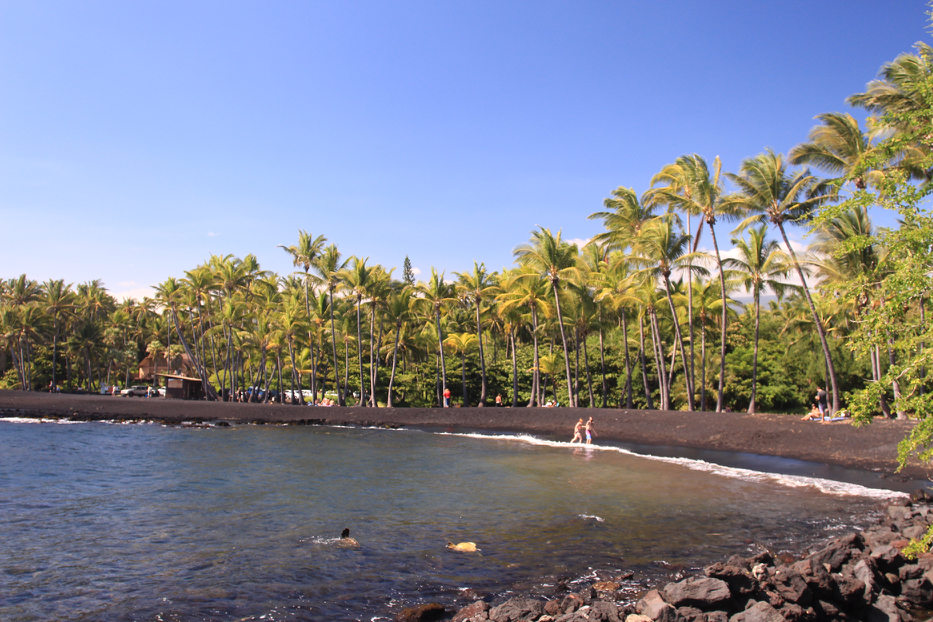 •Punalu‘u Black Sand Beach. South of the national park, explore this picturesque coconut palm bordered beach, whose indigo sands – much-loved by Hawaiian green sea turtles for beaching and sunning, and Hawaiian hawksbill sea turtles for egg-laying – are, like Pohoiki Beach in Puna, actually fine, sea-worn granules of hardened Kīlauea volcano lava. Punalu‘u isn’t safe for swimming, but is a great spot for picnicking or sinking your toes in black sand. 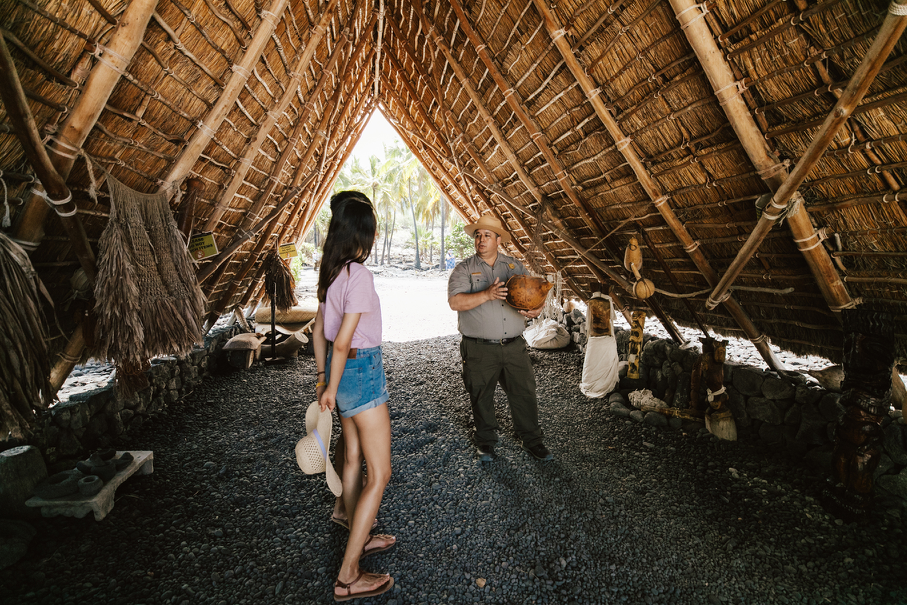 •Pu‘uhonua o Hōnaunau National Historical Park.
Its name means “place of refuge at Hōnaunau,” which was its purpose prior to the 1819 abolishment of the kapu system of Hawaiian sacred laws. Persons fleeing death or harm were given full protection at this oceanfront sanctuary and free to leave after being absolved by its priests. Today, the park preserves the sanctuary, fishponds, royal palm grove and other cultural sites. 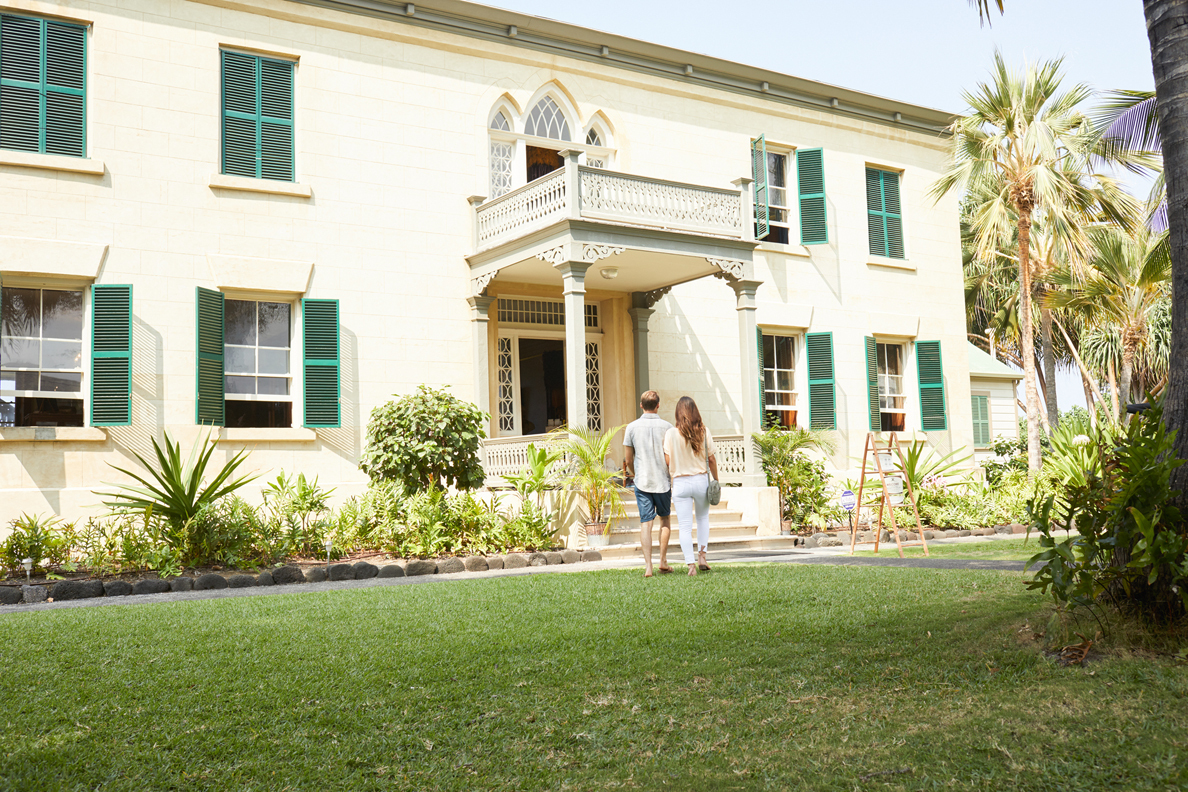 •Hulihe‘e Palace. Its structure built with lava rock in 1838, Hulihe‘e sits on oceanfront acreage once resided by Kamehameha the Great. Through the overthrow of the Kingdom of Hawai‘i in 1893, the palace was home to more royalty than any Hawai‘i residence. Managed and preserved by the nonprofit Daughters of Hawai‘i since 1927, it is now a museum displaying royal artifacts from the era of King Kalākaua and Queen Kapi‘olani, including koa wood furniture, feather works, portraits and Hawaiian quilts. 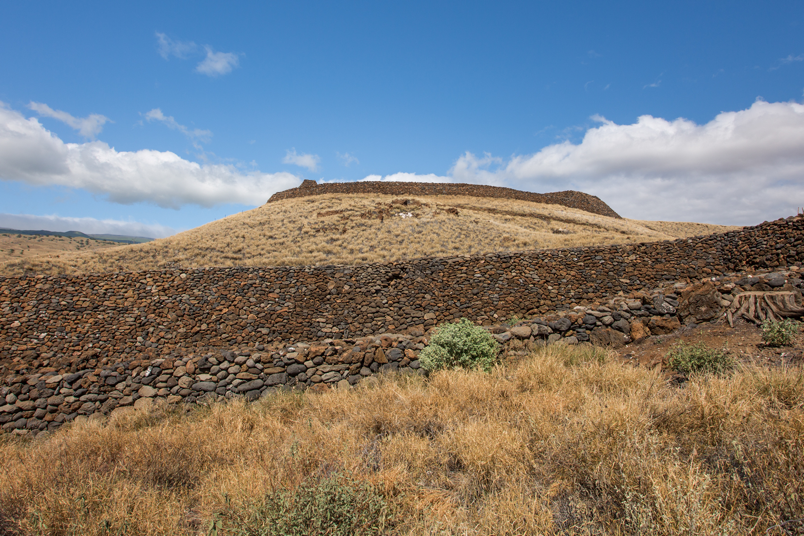 •Pu‘ukoholā Heiau National Historic Site.
Kamehameha the Great commenced the 1790 construction of this massive stone heiau (temple), one of the last major pre-contact sacred structures built in Hawai‘i. Consider the following when you finally lay eyes on Pu‘ukoholā: It’s believed laborers formed a 20- mile human chain across neighboring 5,480-foot Kohala volcano to transport the heiau’s water-worn stones to the site where, without mortar, its foundation and 16- to 20-foot walls were completed in just a year. 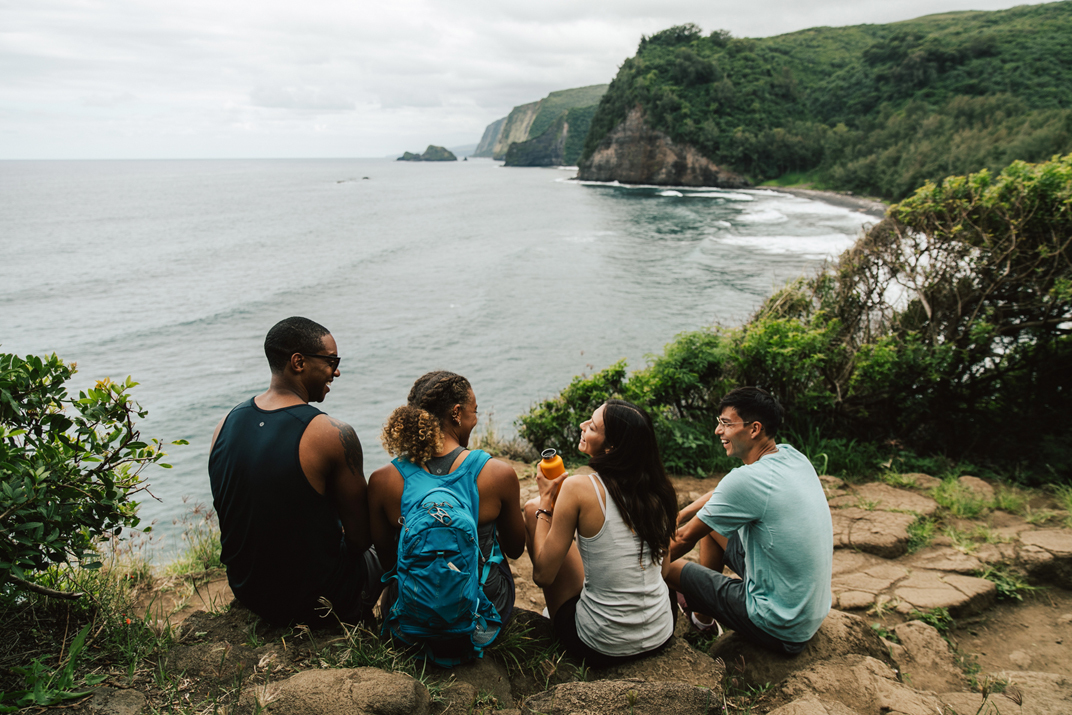 •Pololū Valley Lookout and Trail. This is a gem of a valley for hikers. The northernmost valley on the island cutting into the soaring northeast sea cliffs of extinct Kohala volcano, Pololū is explorable via a half-mile foot trail descending from the valley overlook to its rock-strewn black sand beach (sorry, no swimming) and views its lush interior. Not a hiker? Pololū’s end-of-road overlook offers stunning views of the coast. 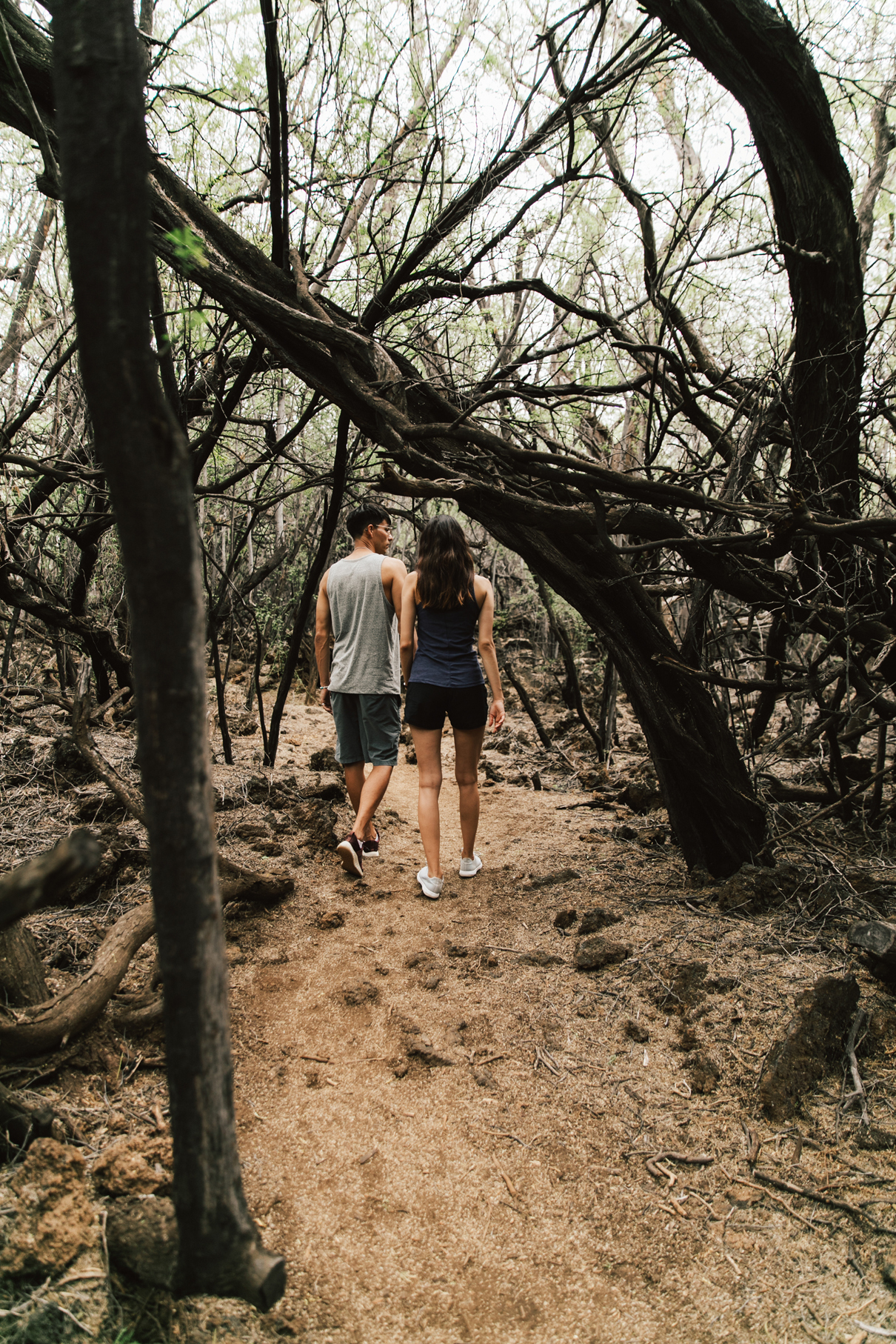 •Puakō Petroglyph Archaeological Preserve. A hike on the trails cutting through this sun-pelted 223-acre lava rock field are said to reveal just a third of the preserve’s more than 3,000 ki‘i pōhaku (Hawaiian for “images in stone”). The true meaning of the rock carvings – some dating as far back as 1200 A.D. – are largely unknown, but thought to be records of early Hawaiian spiritual and everyday life, and big life events, such as births. 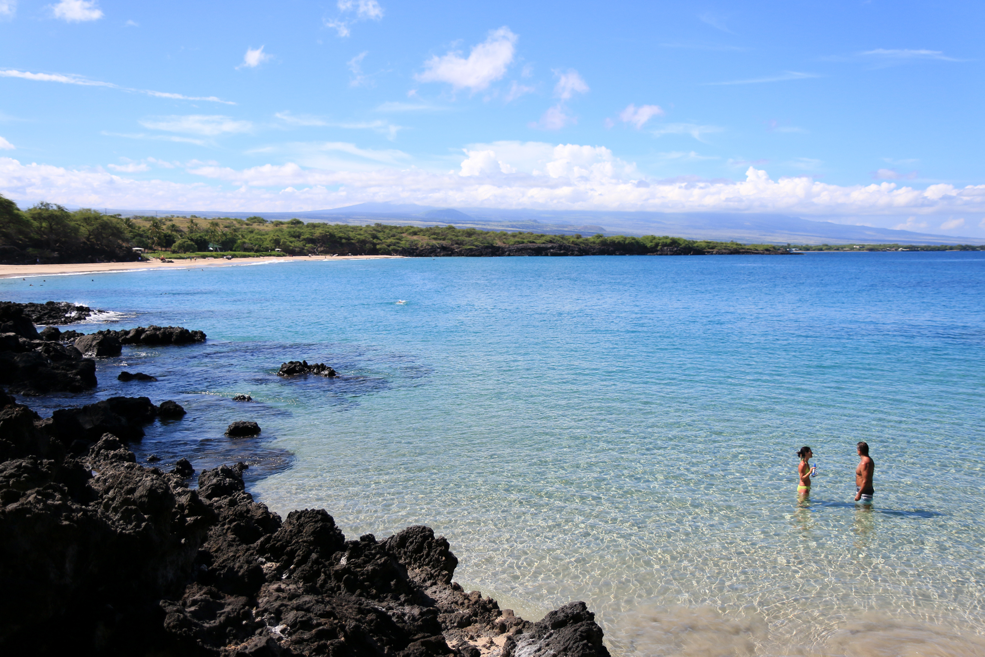 •Hāpuna Beach State Recreation Area. Picture this, beach fanatics: A half-mile stretch of some of the finest, most golden sand on the island, the right amount and heights of wave action to get bodyboarders and bodysurfers downright giddy, and lots of sandy acreage to cop a nap, soak up sun, finish a book or build a massive sand fort. Catch our drift yet? Hāpuna Beach is big. The snorkeling and swimming here is aces, too. Side note, though: Be sure to put on reef-safe sunscreen before hitting the beach. Reason one, the Kohala Coast is extremely sunny. Reason two, reef-safe sunscreen isn’t toxic to our precious coral reefs and will be the only type of sunscreen sold in Hawai‘i come 2021. 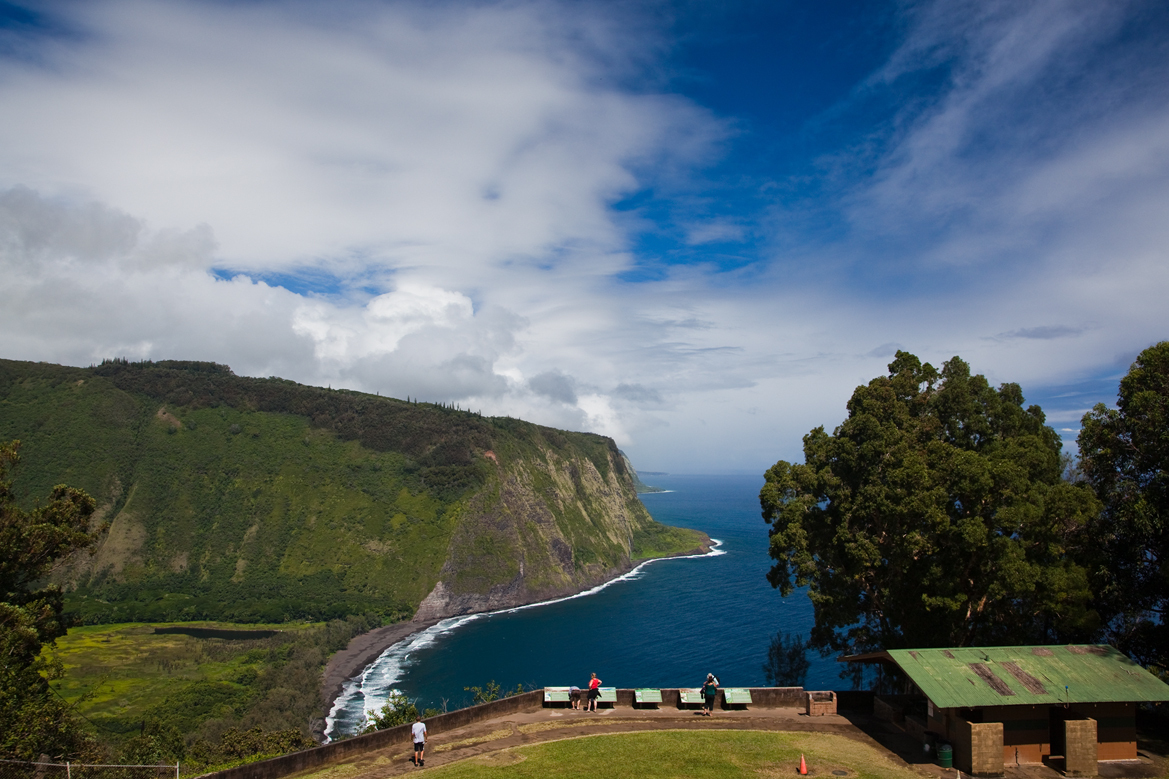 •Waipi‘o Valley Lookout. Full disclosure: You won’t see the entirety of the island of Hawai‘i’s largest valley – six-miles deep, with a mile-long black sand beach, towering north and south walls, and taro farm and wetland floor – from this lookout. But the view from more than 2,000 feet up is still as crazy breathtaking as Hawai‘i vistas get. Interiors of Waipi‘o – boyhood home of Kamehameha the Great – can be seen on guided tours.
•Kalōpā Native Forest State Park and Recreation Area. The reward to the senses here is 100 acres of dense, green and damp Hāmākua Coast upland native rainforest accessible by an easygoing .75-mile nature trail or a picnic area the forest surrounds on all sides. More on that nature trail, though. Typically cool and chilly – you’re at the 2,000-foot elevation of Maunakea volcano, after all – it negotiates old-growth ‘ōhi‘a trees, ferns, flowering flora, diversely fragrant forest air and a forest bird soundtrack. Ahhh. One quick request before you trek any Hawaii native forest: Thoroughly clean your shoes and gear of all outside soil and debris before entering so as not to contaminate the forest with non-native plant material that can quickly spread and kill native flora.

Where do you want to go?